To the Citizens of Waverly and Bremer County,
After a 12 year uphill battle, it is with no pleasure that the Champions Ridge Board is officially announcing that the project can no longer move forward. While we still feel that a combined county fair/ball facility in Waverly is the best, most sensible, and most feasible solution to a host of needs identified over 10 years ago, we are unable to continue.

In 2007, the original volunteers for this project were organized by the City of Waverly with the support of the Bremer County Fair Board and the youth and adult ball groups to design, fund raise, and build a single complex that would be the permanent home for each group. It was a huge request but the volunteers took it seriously and they got to work. Over the years, many volunteers cycled into and out of this work, but all showed passion and commitment to this effort, pushing forward despite the obstacles placed in front of them because that is what they were asked to do. At no point was this group ever told to stop, change directions, or break into separate groups; they just kept plugging away.
Recently, youth baseball & softball have been placed in a situation where they had to choose between continuing to move forward with the unified complex, or have their needs met in a different location with a scaled-down proposal paid for by the city. The Champions Ridge Board could not work with the new proposal because it does not meet the basic requirements placed on us by the city, namely development of a single location that meets the needs of all ball groups and our county fair.

That said, we understand their decision and hold no ill will toward the youth boards that decided to accept the city’s offer. Given the persistent rhetoric by city leaders that we are “no more” and their lack of response to our proposals to move forward, coupled with the youth ball groups’ decision to change locations, our Board feels compelled to recognize that the Champions Ridge project is terminated.

We express our sincere thanks to the many, many volunteers who gave countless hours trying to improve the community through the Champions Ridge development. Also, we are especially grateful to the many donors who see and value the vision that was laid out by the original task force and city leaders back in 2007. Additionally, we owe a deep debt of gratitude to Neil Smith and his family for providing a home for what could have been a wonderful landmark complex for NE Iowa.

We will be spending the next few months working out the details flowing from this current circumstance. A portion of the money raised for Champions Ridge has been spent along the way on a number of development costs including additional design work, engineering, marketing and public relations, consultants, and the like. As of today, we have no final determination as to what happens with the funds that remain. Our efforts will focus on providing our major donors with an opportunity to direct a prorated portion of their donation to another charitable cause.

Moving forward we hope that the entire community will work together to meet the critical needs facing our ball programs and the county fair, as laid out in 2007. We ask that you please refrain from politicizing the work of volunteers and the projects they serve. The “Champions Ridge People” and the “Plan B People” were asked to serve in a volunteer role by the city, and by their respective boards. Respect them for serving their community, selflessly and diligently.

With the November election just around the corner, consider which candidates are best equipped to listen to all voices, engage in constructive dialogue, stay focused on the “big picture,” and pursue bold yet feasible approaches to keeping Waverly vibrant, progressive and an attractive place to live and work. Vote for individuals who you believe will be transparent in their decision making. Vote for the candidates that you think will serve our community best, doing so knowing that you will not always agree with every stance he or she takes, or every vote cast.

Finally, we want the community to know that we support “Plan B.” We recognize it is currently the only project that can meet the needs of our youngest ball players. We trust that the city will remain supportive of the project and see it through until the end. At the same time and in keeping with our 2007 mandate, we implore our city leaders to commit, in writing or other formal action, to building the remaining diamonds needed to serve our older youth and adult ball programs. We remain fully supportive of the Bremer County Fair Board and the tough decisions that they will have to make as they shift back to where we were in 2007, but now with less than 2 years to figure it out instead of 10.

Should the city end up selling the Smith property at a profit, we believe that the right thing to do with the proceeds from that sale is for the city to invest ALL of the money in fair and baseball/softball projects.

We wish all the best to those involved with these projects as they work to make them happen, and we look forward to the outcomes that we have all been waiting for. It doesn’t matter how long it takes or exactly how it happens, so long as it all gets done in the end.

​<----Click on the  "Donate" page to support
the Champions Ridge project!!! 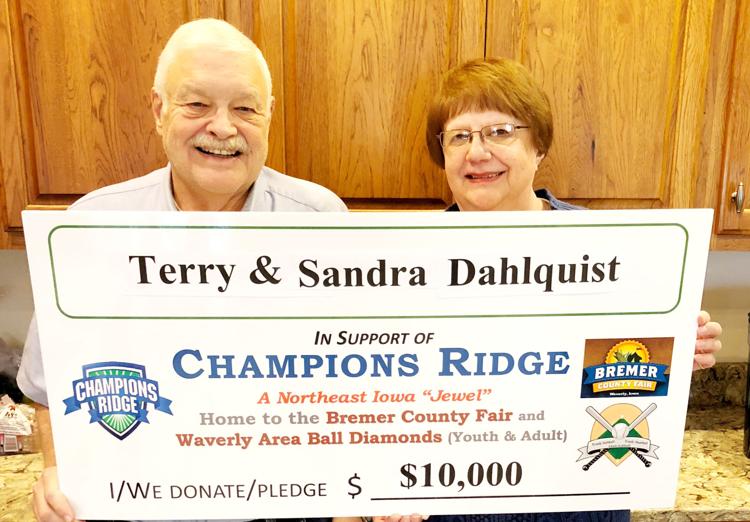 Edward Fuoss holds the oversized check to announce his $50,000 pledge to the Champion’s Ridge project. 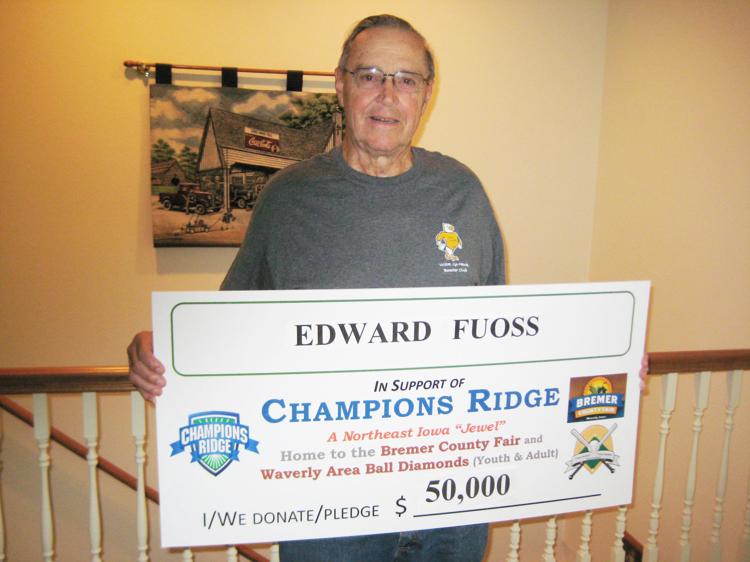 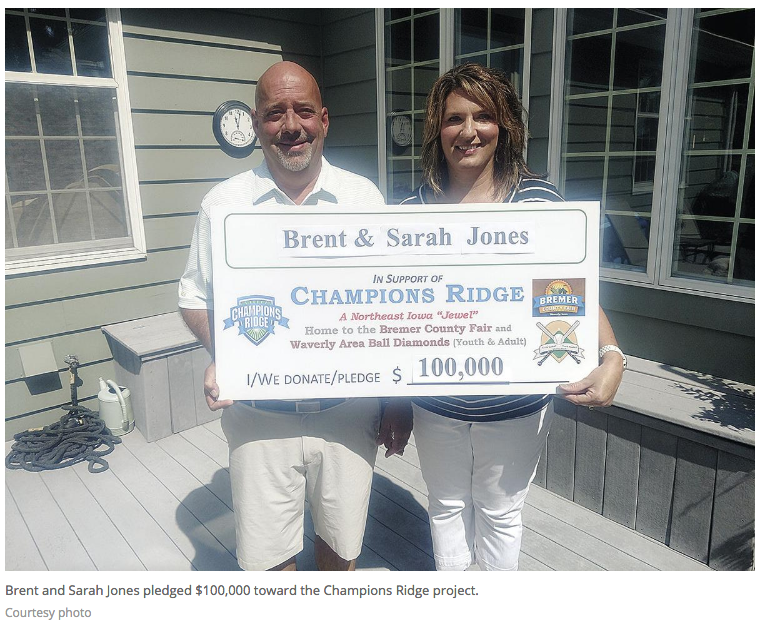 Larrie and MaryAnn Steenhard are one of the most recent donors to the Champions Ridge project, as they pledged $25,000.
Picture courtesy of Waverly Newpapers 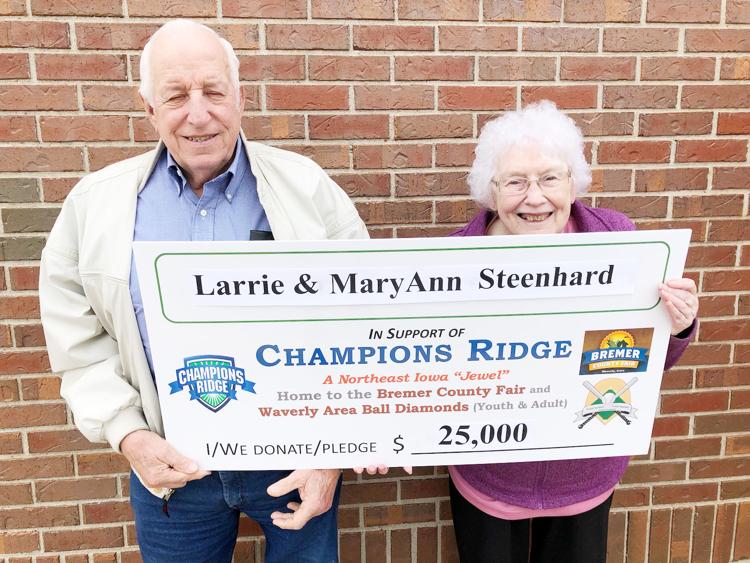 The Champions Ridge project received a $2,500 donation as a result of concession sales at the W-SR youth baseball tournament held this past weekend. The tournament
attracted 29 teams of players ages 9 to 13, with over 330 youth from around northeast Iowa participating. Games were played in three locations, including the Shell Rock, Waverly Kiwanis, and Waverly Memorial Park ball diamonds.
When completed, the Champions Ridge facility will provide enough diamonds to host such tournaments, in a single location with flood-free ball fields and plenty of off-street parking.
The Champions Ridge governing board expresses its sincere thanks to the Bremer County Pork Producers, Waverly Hy-Vee, and W-SR youth baseball for donating their time and concession items at Saturday’s tournament. 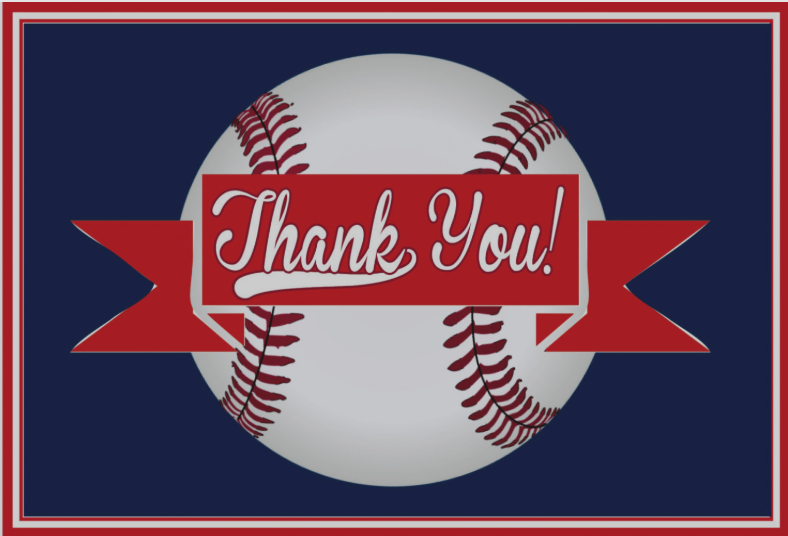 WAVERLY, IA – The Bremer County Pork Producers will be providing pork burgers and hot
dogs during the Waverly-Shell Rock Youth Baseball Tournament this Saturday, June 16. The
Waverly Hy-Vee and the Youth Baseball organization are donating other concession items. The
tournament expects to draw 29 teams from the northeast Iowa area. Teams are grouped into five
divisions, ages 9 through 13. Pork Producers will be cooking at the Waverly Memorial Park-
Fairgrounds ball diamonds and the Shell Rock diamonds. All proceeds from the Pork Producers
and concession sales during the tournament go to the Champions Ridge project. Everyone is
welcome to stop by on Saturday after 11 to enjoy a great tasting pork burger or hot dog and
support Champions Ridge. This “ag–ball collaboration” mirrors the Champions Ridge project,
which is a joint effort between all Waverly-area ball groups and the Bremer County Fair.

A YOUTH AND FAMILY FOCUSED COMPLEX! 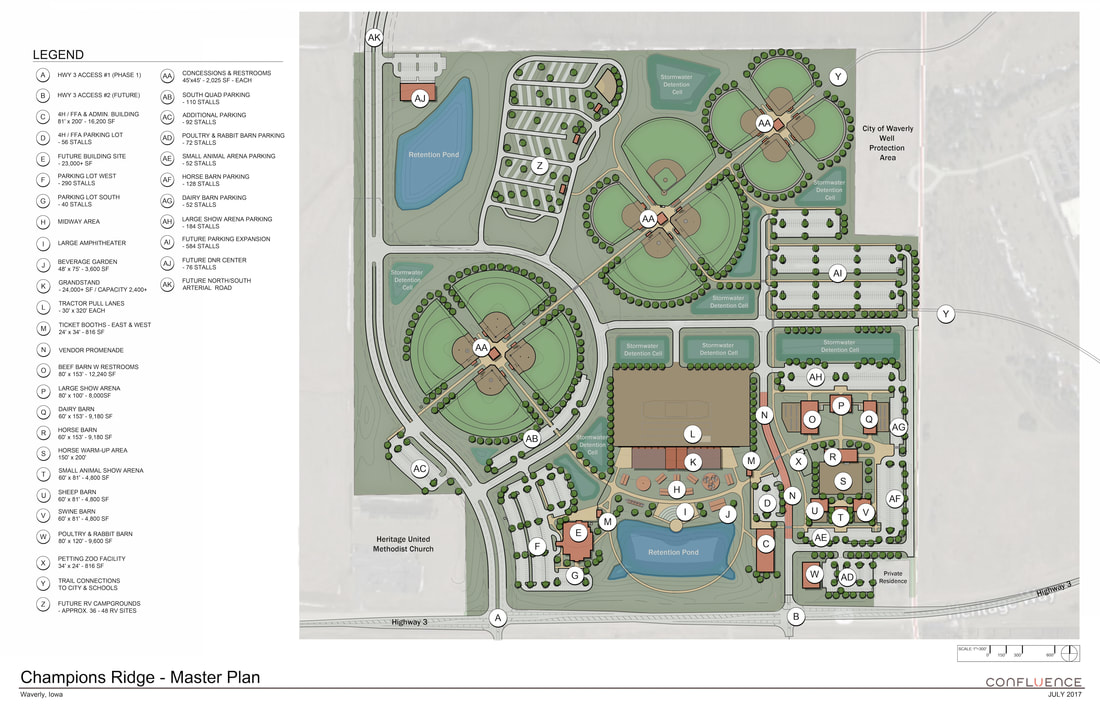 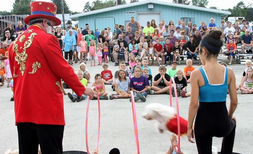 Youth And Family Focused
Each year, thousands of 6- to 19-year-olds will use Champion Ridge’s facilities. Add in adults and families and usage could top tens of thousands. The economic impact could be huge!!
The Ridge’s economic impact for Bremer County provides over $1,000,000 every year. Over the next decade, The Ridge will inject TENS of millions into the area economy. 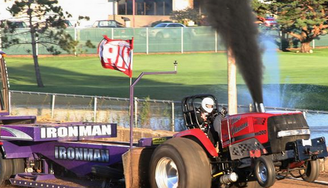 Improved Traffic Safety And Reduced Noise
During ball tournaments and the Bremer County Fair, everyone (youth, participants, parents, spectators) faces increased pedestrian and vehicle risk at the present 4th Avenue location in Waverly. A new facility removes bottlenecks and hazards with off-street parking – and reduces noise in a residential neighborhood. 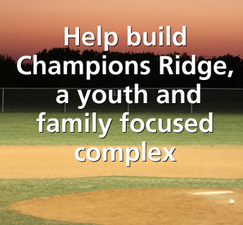 A Permanent Home... With Room To Grow!
﻿The Fair, adult softball, and youth baseball share under-sized and over-utilized facilities in a 19-acre Waverly city park featuring the city pool, skate park, four picnic shelters, a large play unit, three ball diamonds plus the Fair buildings. Also, kids play on a 3-diamond facility on the AMVETS property. Both locations flooded in 2008 and neither site has any room for growth.﻿﻿